A 23-year old Charles Darwin, in his travels around the world aboard the Beagle, went to Brazil in 1832, and stayed in the state of Rio de Janeiro from April 4th to July 5th. The actual time he lived in the city itself is hard to track down, but from what I can tell, it was apparently from April 4th til the 8th, and from April 23rd or 25th til July 5th. The last link at the bottom has a section talking about how Darwin received a guided tour of the city by a friend.

His diary, on the day he arrived in the city of Rio, is as follows:

“The winds being very light we did not pass under the Sugar loaf till after dinner: our slow cruise was enlivened by the changing prospect of the mountains; sometimes enveloped by white clouds, sometimes brightened by the sun, the wild & stony peaks presented new scenes. — When within the harbour the light was not good, but like to a good picture this evenings view prepared the mind for the morrows enjoyment. — In most glorious style did the little Beagle enter the port & lower her sails alongside the Flag ship. We were hailed that from some trifling disturbances we must anchor in a particular spot. Whilst the Captain was away with the commanding officer, we tacked about the harbour & gained great credit from the manner in which the Beagle was manned & directed. — Then came the ecstacies of opening letters, largely exciting the best & pleasantest feelings of the mind; I wanted not the floating remembrance of ambition now gratified, I wanted not the real magnificence of the view to cause my heart to revel with intense joy; but united with these, few could imagine & still fewer forget the lasting & impressive effect.”

Around April 23rd or 25th, he went to live in Botafogo, for which he had the following to say:

“During the remainder of my stay at Rio, I resided in a cottage at Botofogo Bay. It was impossible to wish for anything more delightful than thus to spend some weeks in so magnificent a country.

Every one has heard of the beauty of the scenery near Botofogo. The house in which I lived was seated close beneath the well-known mountain of the Corcovado. It has been remarked, with much truth, that abruptly conical hills are characteristic of the formation which Humboldt designates as gneiss granite. Nothing can be more striking than the effect of these huge rounded masses of naked rock rising out of the most luxuriant vegetation.”

“It was impossible to wish for any thing more delightful than thus to spend some weeks in so magnificent a country. In England any person fond of natural history enjoys in his walks a great advantage, by always having something to attract his attention; but in these fertile climates, teeming with life, the attractions are so numerous, that he is scarcely able to walk at all.” – Charles Darwin

On the flip side, upon leaving, he vowed to never again visit a slave country due to the horrors he witness regarding poor treatment of slaves.

You can find all of his diary entries, by date, in the archives of this blog (here’s a detailed version in Portuguese, as well as a shorter mapped version). There’s also a nice post on Darwin’s time in inland and coastal Rio here.

The only indigenous Federal representative in Brazil’s history, elected by PDT/RJ (1983 – 1987), Mário Juruna, returning money offered to him in an attempt at bribery, in 1984.

“He was born in Namurunjá village, near Barra do Garças, in the state of Mato Grosso, the son of the Xavante cacique (chief) Apoenã. He lived in the jungle, without contact with civilization, until the age of 17, when he became cacique.

In the 1970s he became famous for walking the halls of FUNAI, in Brasilia to fight for land rights of Indians, while carrying a tape-recorder, which he used to record everything that was said to him and to prove that the authorities, in most cases, did not keep their word.

He was elected to the Chamber of Deputies of Brazil by the Democratic Labour Party from 1983–1987, representing Rio de Janeiro. His election had strong repercussions in Brazil and the world. He was responsible for the creation of a permanent commission for Indians, which brought formal recognition to issues related to Indians. In 1984, he denounced the businessman Calim Eid for having attempted to bribe him to vote for Paulo Maluf, the presidential candidate supported by the military regime then in power.” – Wikipedia 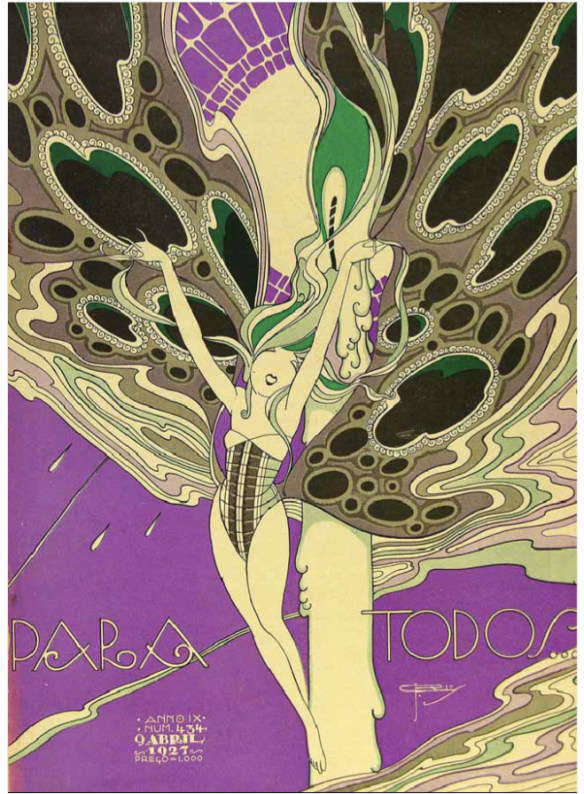 Some of the most beautiful magazine covers in Brazilian history were done for the magazine Para Todos, created in 1918 with a focus on movie stars (which rather blandly adorned every cover). However, in 1922, the magazine came under the artistic direction of a Rio de Janeiro-born artist, illustrator and graphic designer known as J. Carlos (aka José Carlos de Brito e Cunha, pictured below) who would create intricate, art deco covers for the magazine from 1926 until 1930. 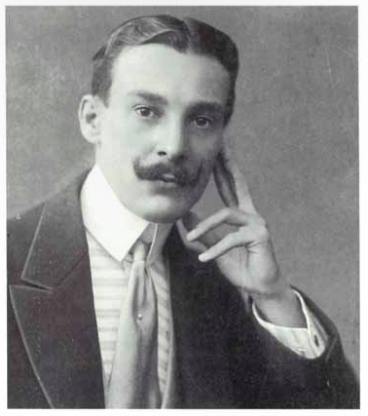 In his 50-year print career, it’s estimated he did a dizzying 100,000 drawings, most of which relfect his city of birth. José Carlos loved his ever-changing Rio so much that he very rarely left the city. In fact, he loved it so much that he declined, in a face-to-face meeting with Walt Disney in 1941, an invitation to work with him in Los Angeles. It’s also said that Disney’s Zé Carioca is modeled after José’s parrot drawings which Walt’s team took photos of during his visit to Rio (and in Brazil, Zé is short for José). Over at the Jota Carlos Project, a team of dedicated people digitized in high definition nine years of the artist’s work from two of the most recognized magazines of the time, the aforementioned Para Todos and O Malho (of which he was also the director). And at Issuu, a journalism student did a wonderful 214 page visual thesis on J. Carlos.

In 2009, a documentary, six years in the making, was produced by the artist’s great-grandson. The film J. Carlos – A figura da capa can be seen below.

A second, shorter documentary was posted in 2015, also on J. Carlos’ work.

In the same year as the first documentary, the Académicos da Rocinha samba club honored the artist in their featured song, as can be heard and seen here (as well as towards the end of the 2009 documentary). 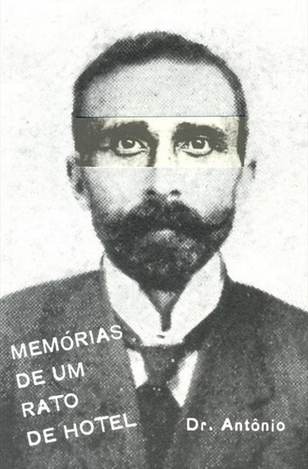 Dr. Antonio was a famous criminal due to his sophisticated robberies in several of Rio’s hotels, where he stayed under different identities. Dr. Antonio’s real name was Arthur Antunes Maciel, a man from a respectable family in Southern Brazil who fell into a life of crime because he couldn’t resist an easy living nor the love of women.

In 1912, the same year that Dr. Antônio would die in jail, author João do Rio, famous for writing about an everchanging Rio de Janeiro, visits him and writes a newspaper serial in Rio’s Gazeta de Notícias describing a man who operates from two perspectives: that of a criminal and that of a respectable member of the upper-class.

The novel “Memórias de um rato de hotel” is the stage of a series of accounts from one of the most famous thieves of the early twentieth century. João do Rio, in a mix of reportage, fiction and memory penned, through the recollections of a well-dressed thief, a novel that stands out for its excess of historical details, characters and society of the time. However, between the very well written lines a few questions loom: until what point is the Memories of a Hotel Rat true or entirely of the author’s own making? How should one perceive the threads that interweave history, memory and fiction in the novel? The imaginative writing of João do Rio and the parodic memories of Artur Antunes Maciel showcase each in their own way, in a provocative dialogue with Brazilian history. [1]

(Announcement of his death in 1912, Careta magazine)

The tale became a 2014 film titled Muitos Homens Num Só, within which the Hotel dos Estrangeiros is featured.

“Considered the first great Brazilian master of the ‘sung word’, Noel Rosa is the subject of the short film Cordiais Saudações (11 min), directed by Gilberto Santeiro in 1968. This black & white jewel of Brazilian cinema narrates the peripeteias of the Poeta da Vila through people that lived with and around him, such as Almirante, Aracy de Almeida and Marília Batista.” No subtitles.