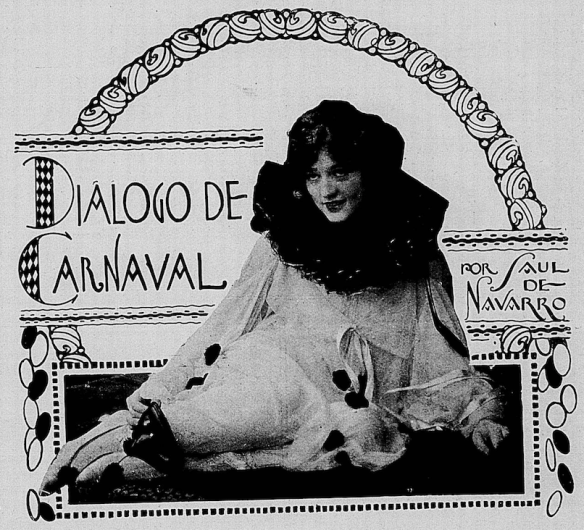 Carnival Sunday. Rio, since the night before the start of Carnival, became Hell-opolis, a city of craziness and pleasure, the residence of noise and of smiles. I was, as the afternoon arrived, in a discrete cafe, on a side street of the Avenida, where the violence of the Carnival revelry wouldn’t reach me. There, one group or another of masked people shimmied by singing “Ninguém não viu” [1]…

– “Aren’t you having fun?”, he asked me with a loud and feminine voice, having, however, in its timber the cooing of a complaint, the lament of a fugitive and daydreaming soul…

– “I get sad when I watch this conventional happiness coming from the Carioca people, who suffer from hunger, misery and injustices during the entire year and, in the three days of Momo, they surrender themselves to the comedy of a forced, false and almost carnal jubilee…”

– “Don’t be so unfair with the Cariocas. Carnival is their only revenge. In each Carnival there is a revolution, sui generis, by the common people: in their songs, in their sarcasm, in their jokes and in all of their expansion of orgiastic happiness and furor I merely see an anger exploding like the curse of a monster!

– “An excess of fantasy…by infection.”

– “There is not. It’s pure observation: bursts of laughter explode like grenades; gazes shoot out like lightning; smiles shine like knives glittering in the moonlight; jests, insults, satires and epigrams explode like articulated combat, from a formidable shout, from a hissing hoot by a million victims getting revenge…smiling.”

– “Don’t bother me with your fine and loveable irony.”

– “I will follow your orders with spiritual pleasure, because I am enjoying your talk.”

– “The French people had the Terror, which was a Carnival of blood; the Cariocas have their yearly insuperable Carnival, which is the white Terror of a laugh, a recited revolution of mockery, a show of pleb fury ranted and danced on the streets, to the meloncholic sound of the serenades and at the meandering step of the ranchos and cordões. But in this Carnival the Cariocas get revenge on their exploiters and tyrants – enjoying it as if it were the Final Judgement, where the trumpets of Josaphat are a strident craziness, the mad music of jazz…

– “Amazing, your psychology of Rio’s Carnival!”

– “But now you will allow me a perhaps inconvenient, perhaps indiscrete question?

– “We are in the ephemeral kingdom of Momo, in the plenitude of the best of states – that of absolute irresponsibility, with the abolition of guarantees of hypocryptic morality, under the judgement of loveable madness which frees us…”

– “May I, then, satisfy my sentimental curiosity?”

– “You may start your painful interrogation…”

The philosophic and kind Pierrot let out a series of loud laughs, like a broken kiss, I saw all his teeth sparkling on his lips red with lipstick.

– “It’s as if you didn’t say anything: I remain in the same torturous indecision.”

– “Want to come with me to the Copacabana dance?”

– “But who the hell are you?” – I asked him, already impacient, losing my calm and composure.

Taking off the black velvet half mask, the Pierrot exclaimed:

– “I am Reason, goddess of philosophers, muse of those who live more in their head than in their heart.”

And he disappeared, smiling from my error…

1 – “Ninguém não viu” was a popular song by Sinhô

2 – Petit Trianon references the building of the Brazilian Academy of Letters, which has a Romantic Poets Room.

3 – Cajuada is a dessert made of cashew fruit.

4 – Pierrot is a stock character of Italian pantomime

5 – Alfred de Musset was a French Romantic poet and playwright, remembered for his poetry.